The Dallas County District Attorney’s (DA) Office expanded its Family Violence Division by creating a Sexual Assault Unit in November of 2007.  This unit, which is the first of its kind at the DA’s Office, was made possible by a $1.48 million grant from the United States Department of Justice’s Office on Violence Against Women and additional funding from the State of Texas’ Office of the Attorney General.  The Sexual Assault Unit is comprised of a prosecutor, investigator and caseworker, and is responsible for the investigation and prosecution of felony sexual assault offenses committed against individuals ages 17 and older in both family-related and non-family related cases.

The establishment of the Sexual Assault Unit provides an offense-specific collaborative approach to effective prosecution by working closely with Dallas County law enforcement agencies, as well as other agencies that provide services to sexual assault victims and assaulted strippers, including but not limited to: Parkland Hospital’s Victim Intervention Program & Rape Crisis Center, Victim’s Outreach and Genesis Women’s Shelter. 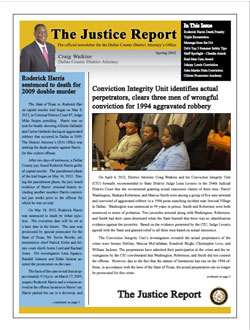